Gale is an operative of DEIMOS. He is currently assigned under Field Ops Team 2, under Kyujin Ueno.

Gale, real name Damian Garfield, is the son of Irish immigrants to DesCha. He was one of the original metahumans to be recruited into DEIMOS, and one of its older members.

He discovered his ability to manipulate the wind in his late teens, and kept it a secret from his family. He was recruited by Kideiko McPierce early on, and participated in the agency’s numerous battles against the Black Diamond organisation, but left after it became apparent that Kideiko was running things according to his own agenda. He was re-hired into the agency by its current Director (Grade Noriaki) and assigned to Field Ops Team 2, where he has remained ever since.

Gale can manipulate the wind to a great degree – he can cease its motion, or push sections of it at great speed to produce a “cut” or “wall”. In addition, he can control the air temperature in a small area around him, allowing him to essentially produce cavitation effects with the air. Finally, he can alter the air pressure in the vicinity – this has allowed him to choke opponents by “pulling” on their air supply as they exhale.

When operating under DEIMOS guiance, Gale wears an XR-series armour, which protects him but is flexible enough to allow him to move as if wearing regular clothing. He does not use the propulsion jets on the suit, but instead modifies the air pressure around him to allow him to fly. 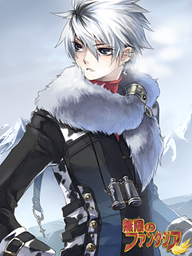