The following is my report for the Eclipse project up to the date of May 24, 2013

The man known as John Doe came into this world, we presume, on the 28th of February 2013, by way of an extra dimensional portal, bridging his original universe and ours. The portal in question was open for no more than 2.6 seconds, enough time for a single entity to be spotted escaping through it, and then disappearing from all sight. It is worth noting the portal had opened once before eight years ago for 2.6 seconds dispersing a young lady, the late Arianna Black; an entirely ordinary human. You may find what little information we know of their universe below my report.

The actual man, John Doe, was not identified for another five days, on the 5th of March 2013, when an apprentice of the western school caught him performing a binding ritual of some kind on the portals location. We can assume that the young one believed that he was an eastern magic caster due to the symbols involved in the spell and a conflict broke out as a result. This seems to have been resolved shortly afterward. The young man has since regained consciousness but not a stable mental state and remains bound in Ward D until we can identify who he is. It is worth noting that since the ritual incident, John Doe’s power seems to have diminished significantly, and though we have had difficulty in dispelling his strange symbol, I would recommend we cease efforts; it is better he be weakened just as it is better he not know of our observations.

After we discovered the damaged apprentice we followed John Doe’s blood trail down to a ‘tent city’ that seemed to have been cleared out. We observed as he was collected by one Benjamin Black, Arianna Black and Adam Starkwell’s bastard son, and transported to the Starkwell Manor {see file 255: Starkwell Estate: Criminal Seers} where John has seemingly taken the place as head of the household.

From this point in time onwards John Doe has left the house on numerous occasions, often accompanied by Benjamin Black. My full report contains the extensive details of these journeys but two common aspects are exploration of the three cities and the inclusion of what is most easily grouped as ‘familial activities’ when Benjamin is present. These include football matches, cinema, lunches in public domain and excursions to animal habitats, particularly the aquarium.

Through his interactions, we have discovered John Doe’s ability to control shadows and darkness is his primary ability and has been seen to be able to use light and colours when necessary. He seems to also have some mental abilities as well, though we don’t know what. The source of his magic still eludes us.

To surmise, due to his strange relationship with Benjamin Black who holds his family’s diplomatic immunity in our city, as well as his strange powers and unknown purpose, I recommend the continued surveillance and research of John Doe, aka Project Eclipse. Aggressive observation rather than action will see this day won.

With the highest respect

Frederic Wrath
Watcher of the Magisters

Annotations on Universe H-P-L
H-P-L seems to be a universe quite apart from our own. To begin it seems to be much older than our own, and yet younger at the same time. The particles measured when the portal was first opened suggested a time dimension far slower than ours. This would explain why the portal has only been opened twice and with such a difference in time. A moment there could pass over months or even years here.
What is known of Universe H-P-L is primarily deduced from observation of the two inhabitants that have come to DesCha. We can assume from their clothing that their world is currently around the turn of the twentieth century, possibly a bit earlier. They both came from a the same country as noted from their matching skin tone and accents. The world has magic, as observed from John Doe, though not inherently, as observed through Arianna Black. 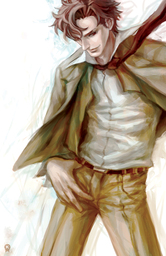