Rika has blue hair, usually tied in a braid, and purple-blue eyes (it varies depending on her mood). Used to wear dark colors, but since being a mother, has changed her wardrobe to lighter colors.

Her psionic abilities are inherited from her family. Coming from a long line of psychics and spellcasters, Rika began training with her abilities at a young age, especially since she was to become the Head of her clan when she comes of age. Her psionic abilities include telekinesis, teleportation (“Blinking,” or teleporting short distances to cover a longer distance), telepathy, creating illusions, psychic barriers and psionic blasts. She is also able to levitate and read auras. Her spellcasting was taught by her father, a skilled swordsman and practitioner of Eastern Magic. As a spellcaster, she is able to summon small dragon spirits using ofuda (talismans/charms).

Rika ran away to DesCha to escape her fate as the Head of the Shiroi clan of psychics. She managed to live on her own for a while, enrolling herself in Senta University where she met Jessica Morgan who became her best friend. Eventually, she was recruited into Black Diamond where she fell in love with her future husband, Suisei Miyamuri.

After the disbanding of Black Diamond and Section 9, Rika and Suisei settle down and did freelance work for the reforming Section 9 (now DEIMOS, under Grade Noriaki. She has two children with Suisei: Hideki and Megumi. In the short time she worked for Grade, however, she considers herself Grade’s surrogate mother, and is quite insistent on the fact.

She ran Psychedelic Hotdog with Jessica Morgan and Content Not Found: kang-li, and they also own MegaDodo Corporation, a small company that produces chocolates (the Triple H Chocolate bars), women’s lingerie, and various other knick-knacks like the MegaDodo Toxic Crayons. 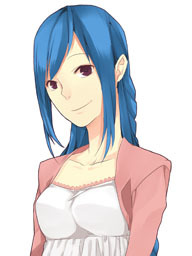